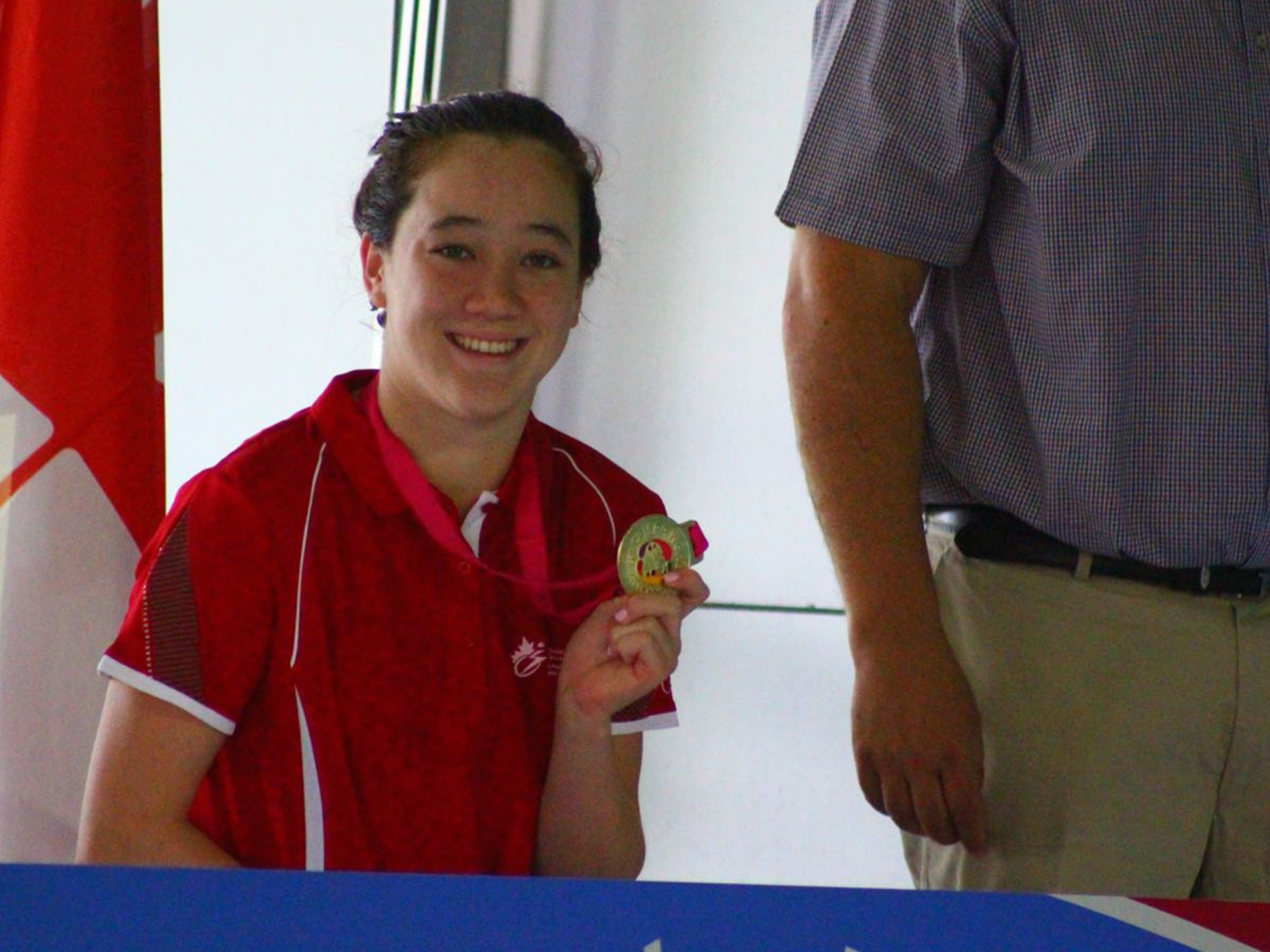 Sant Cugat, Spain (August 10, 2018) – Canada continued their success during the second day of competition at the CPISRA World Games, earning nine medals in the pool, seven in athletics and three in boccia for a total of twelve gold, five silver and four bronze.

“I’m very satisfied with my PB’s in back and breast, as these are not my strongest events” said Plamondon. “I’m looking forward to my 400 Free tomorrow.”

Jessica Tinney (Toronto, ON), a dual sport athlete in athletics and swimming at these Games, channelled her earlier athletics success to add two swimming medals, taking bronze in the S6 400m freestyle and gold in the S6 100m backstroke. Tinney then returned to the track to add a silver medal in the T33 200m, bringing her total to four medals so far.

Megan Sherwin (Toronto, ON) added another gold medal in the pool by winning the 400m freestyle. She was focused from the start of the race and had her sights set on swimming with accuracy and speed.

“I wanted to push myself and see how hard I could go and how long I could hold the pace” said Sherwin. “I was up against strong competitors from Spain and Great Britain, and that kept me on my toes during the event.”

The best may yet to come for Sherwin, who has three more events tomorrow.

Rounding out the swimming results, Michelle Tovizi (Markham, ON) finished came heartbreaking close to the podium, finishing fourth in the 50m Fly and 400m Free. “Michelle showed amazing resilience in her 400 free as she had just completed a strong 50m fly less than ten minutes prior to her 400”, said coach Karen Williams.

Lead Coach Janet Dunn was impressed with the athletes’ performances thus far. “They are really thriving in the games atmosphere here at CPISRA and benefiting from the strong Canadian team bond these young races bring”.

The fact that Diallo is competing for Canada at all is the result of her parents’ desire for her to have the best possible opportunity for success in life. She was born in Liberia and spent her early years in France before her family immigrated to Canada. She credits that move with laying the groundwork for her athletic career. As a teenager, Diallo’s physiotherapist suggested she take up a sport. She started with wheelchair basketball but always had racing in mind and when she finally tried it, she knew she had found her sport. “I loved the adrenaline of going fast that wheelchair racing brings, which I can’t get from my daily life.” She is now juggling the demands of training with her career as a high school teacher.

This isn’t Diallo’s first international competition, but it’s the first time she’s competing solely against athletes with cerebral palsy and she is really enjoying the experience. “We’re athletes and we always want to see how far we can go, but we have our limitations depending on our disability, and I don’t feel that here as much.”

In the men’s T38 200m race, Kyle Whitehouse faced strong pressure, and rose to the challenge to take his second gold medal of the games.

The boccia competition began with team play. The development format of the event meant that some Canadians were teamed up with athletes from different countries.

In the BC3 pairs event, Jennica Gagne (Dartmouth, NS) was paired with Scotland’s Sean McCann. The new partners hit it off, winning the bronze medal. Hayley Redmond (St. John’s, NL) also successfully teamed up with Scottish athletes and also finished with a bronze medal.

The individual boccia competition also began today. Mercer went undefeated in pool play and secured a spot in the playoff round tomorrow. Teammates Redmond and Collins will face each other tomorrow in the last game of pool play with a playoff berth on the line.

The CP World Games are set to finish tomorrow, with more events in athletics, swimming and boccia yet to come.