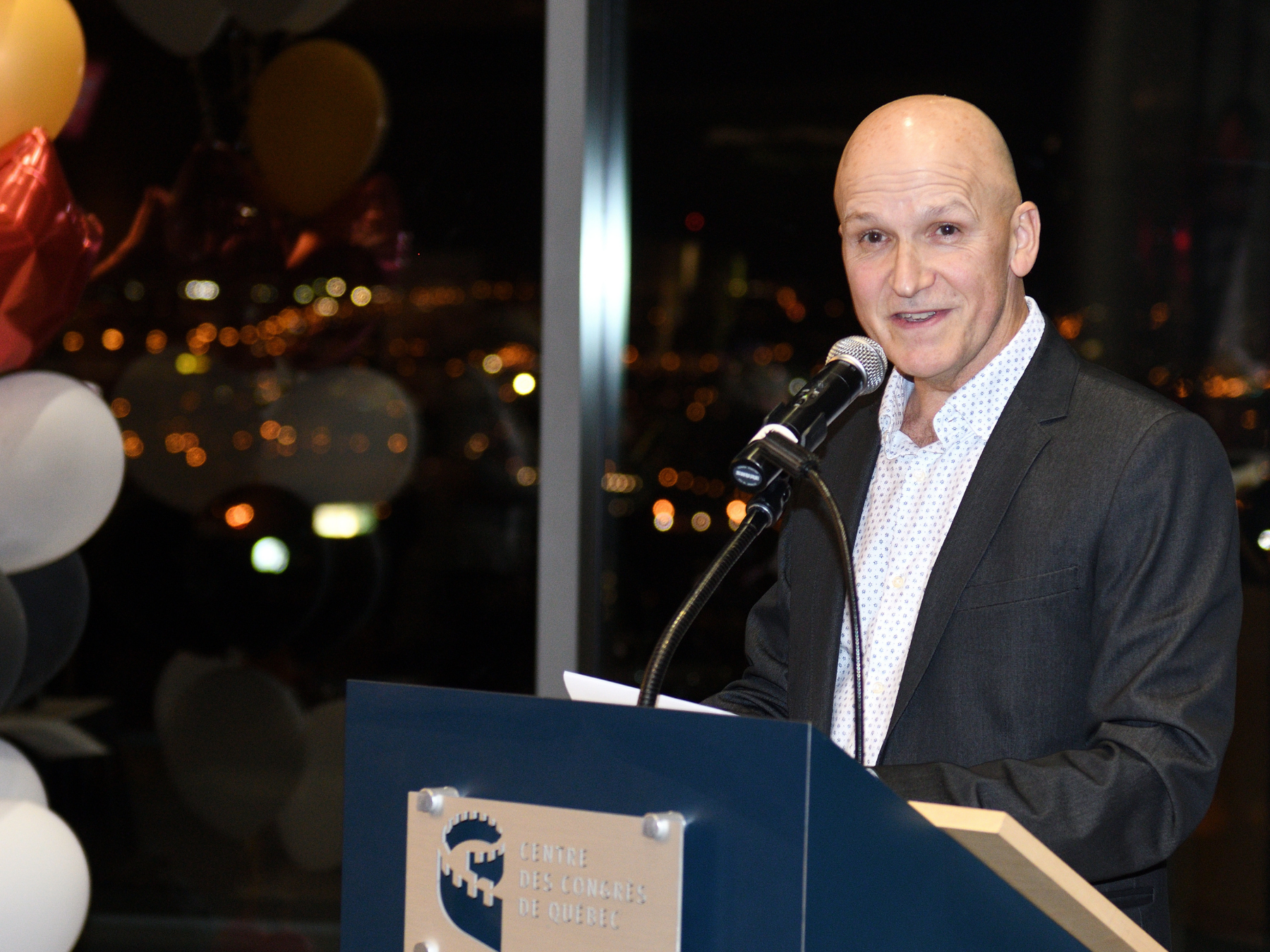 Alain Grenon accepted the award at the Centre des congrès in Québec City, the venue of the 2021 Canadian Boccia Championships

Ottawa, ON (January 17, 2022) – The Canadian Cerebral Palsy Sports Association (CCPSA) is pleased to announce that Mario Delisle and Alain Grenon are the newest members inducted into the CCPSA Hall of Fame. The Hall of Fame was established in 2005, recognizing CCPSA athletes, coaches, officials, builders, and teams that have had a profound impact on the organization, achieving success nationally and/or internationally. The Hall of Fame acknowledges individuals who have contributed to the sport landscape, allowing persons with disabilities to develop into lifelong participants of sport. “Beyond [Mario and Alain’s] training and professional skills, they are men of heart,” noted José Malo, Board Director, CCPSA. “Their respective generosity and commitment have been, and still are, the driving force behind many initiatives that have contributed to the recognition of boccia as a sport, and its participants as athletes in their own right. Through two respective paths, they have been able to follow the same direction of sporting excellence in boccia.” Builder Category: Mario DelisleMario Delisle has been involved in boccia for approximately three decades in many different roles. Delisle has taken on many leadership positions as Sport Coordinator for the l’Association québécoise de sports pour paralytiques cérébraux (AQSPC), Physical Activity Coordinator for the Centre d’intégration à la vie active (CIVA), Head Coach of the Boccia Québec team, Coordinator for the Development of Excellence at the Association québécoise des sports en fauteuil roulant (AQSFR) and current Head Coach of the National Boccia Team since 2005. He has coached many athletes including Paralympians Paul Gauthier, Adam Dukovich, Alison Kabush, Dave Richer, Josh Vander Vies, Marco Dispaltro, and Alison Levine. As Head Coach in 2012, Josh Vander Vies and Marco Dispaltro took home a bronze medal in BC4 Pairs at the London Paralympics.    Over the course of his career, he has contributed to the development of other wheelchair sports in Canada including wheelchair basketball, para-athletics, wheelchair rugby, wheelchair tennis, and para-cycling. Delisle has played a role with the organization of the CIVA and Défi sportif AlterGo events from 1995 to 2002 and was involved in coaching and leading various wheelchair sports while working at the AQSFR.   Officials Category: Alain GrenonAlain Grenon has been involved in boccia for over twenty years and first started in 1998 when he became a provincial referee for Québec. In 2002, he obtained his international referee distinction, making him the first international boccia referee from Québec. Under this distinction, he participated in the 2003 New Zealand World Cup and the 2004 Athens Paralympic Games as a referee. In the span of eight years, he managed to quickly climb the ladder that led to one of the most important positions in the sport of boccia; that of technical delegate. In 2006, he became the first Canadian International Technical Delegate in boccia where he used his new skill set at the 2007 World Cup in Vancouver and the 2009 Americas Cup in Montréal. His greatest dream was accomplished in 2004 when he attended the Athens Paralympics as a referee. He then went on to participate in two other Paralympic Games in London in 2012 and Rio de Janeiro in 2016 as referee.   Additionally, he has provided his expertise at training, competition, and development sessions at the provincial, national, and international level, training future boccia referees in the system. He has worked with athletes at all levels, from beginner to boccia Paralympians. QuotesMario Delisle“When I was first told about my induction, I was not sure if I had a place yet because I am still quite active with boccia! After thinking about it further, I realized that it was here in Québec with the AQSPC team that it all started for me. To receive this honor at the Canadian Championships, on Québec soil, in the company of people who share my passion, was a great honor. I am proud of what I have done for the development of boccia in Québec and across Canada. Since the 1990s many people have contributed at all levels and it is together that we have succeeded in putting the sport of boccia on the map in Canada.”

Alain Grenon“It is with great pleasure that I learned of my induction into the CCPSA Hall of Fame. At the time, I thought to myself, ‘What did I do that was so special to deserve this honour?’ As I looked back over my career, I realized that it has been 23 years since I first got involved in boccia. I realized that I have done a lot of things as a coach, referee, technical delegate, referee trainer and in the organization of competitions to help the sport progress. To be inducted in front of the people I share this passion with on a daily basis, is even more wonderful.”