The Canadian swimmers continued their podium success, adding five more medals. Nicolas Plamondon (Québec, QC) was also one of the team members delayed by the thunderstorms in Toronto on the way to the Games and ended up missing the opening ceremony as a result. He didn’t let that hamper his Games performance, finishing with four gold and one bronze medal.

“Todays’ competition was rough compared to yesterday because there was little time to rest between swims” said Plamondon. He also enjoyed the opportunity to compete solely against other athletes with cerebral palsy, as he usually competes against athletes with a variety of disabilities.

It was a similar situation for Megan Sherwin (Toronto, ON) who found herself on the schedule for three events in the morning. Sherwin overcame fatigue to claim two silver medals in the SM8 200m individual medley and S8 100m butterfly and one gold medal in the 100m breaststroke.

For dual sport athlete Jessica Tinney, it was also a busy and successful day. She started out on the track, racing to a bronze medal in the T33 400m. Less than an hour later, she was in the pool to compete in her final swimming event, where she won gold in the SB4-5 100m breaststroke, improving her personal best by six seconds in the process. 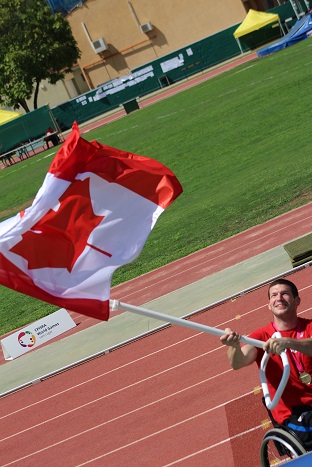 Also on the track, Lee Leclerc (St-Paul, QC) executed the plan for his final two races with precision. He started the 1500m with a great pace and created some distance from his competitors in the last lap, to ultimately claim gold. The 400m race started slow but Leclerc managed speed up to catch the lead group and overtake them for the gold.

It’s been a quick rise through the ranks for Leclerc, who started racing just three years ago. He credits a meeting with Paralympian Alex Dupont at the Defi Sportif in Montreal with igniting his interest in racing. After trying out a few different racing chairs and attending an Athletics Canada Next Gen camp, Leclerc hasn’t looked back.

For Leclerc, this competition was great learning opportunity as he raced in conditions he hadn’t seen before. “It’s exactly what I was missing in my track experience; the water, the wet track and the soft track. It was perfect for practice, and I’m happy with the overall experience.” Leclerc will now set his sights on the 2019 World Para Athletics Championships in Dubai.

In a repeat from yesterday, Djami Diallo (Pitt Meadows, BC) and Rachael Burrows (Oakville, ON) took silver and bronze in the T34 400m. Zachary Gingras (Markham, ON) finished the competition on a high note with a second gold medal performance in the T38 400m.

The athletics event finished with a 4x100m relay demonstration event that mixed athletes of different classifications together. Zach Gingras, Mike Johnstone (Stratford, ON), Hudson Booth (South River), and Kyle Whitehouse (St Catharines, ON) ran the relay for Canada. It was a great learning experience for the athletes, some of whom had never run a relay before.

Athletics Team Leader, Amanda Fader was extremely proud of the talented group of young athletes that she and other coaches supported this week. “Every team member worked hard to contribute to our hefty medal take! There were multiple learning moments that we could have done without, but the great team vibe kept smiles on our faces.”

On the boccia court, Michael Mercer (St. John’s, NL) lost in the BC2 finals to take home a silver medal in the individual competition. Teammates Jennica Gagne (Dartmouth, NS) and Lois Martin (St. John’s, NL) both finished their individual competitions on a positive note, winning a bronze medal each. It’s the first international boccia medal for Gagne, who just started playing boccia a few years ago.

“It feels amazing, much better than I could have ever imagined,” expressed Gagne. “Competing at the CPISRA Games has made me realized that I love competing at a higher level.”

Coach Cluney spoke highly about his athletes. “I was very impressed with the composure shown by all the athletes as they played for medals today. For some of them it was their first international competition. They should be very proud of their accomplishments. They are great ambassadors for their sport and Canada.”