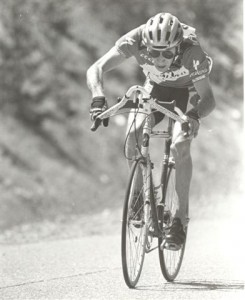 The life of Montrealer Gary Longhi was turned upside down on August 11, 1983, when he was involved in a motorcycle accident at age 19. He remained in a coma for three months. After a long period of rehabilitation, the native Italian began cycling in 1985. He earned his first Paralympic medal at the Barcelona Games: a silver in the 5 km individual time trials. However, his best performances were to come in Atlanta in 1996, where he won the Paralympic title in individual time trials, as well as bronze in the road race. In addition to his performances at the Paralympic Games, Gary Longhi was a dominant figure in his category (cerebral palsy – CP4) throughout his career, earning many titles and medals at national as well as international competitions.

What distinguishes Gary Longhi from all other athletes, Olympian or Paralympian, is his unique sense of humour. Add to that his great joviality and kindness, and it is not surprising that all who know him find him remarkable and appreciate his efforts.  In 2000 he received one of athletics’ highest honours when he was chosen as flag bearer for the Canadian team during the opening ceremonies of the Paralympic Games in Sydney.