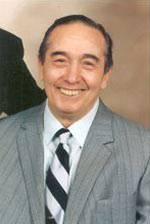 In 1983, following a presentation by Lou Legeault (Ontario) to the Annual General Meeting of the Canadian Cerebral Palsy Association, Henri saw a golden opportunity to start the process of establishing a Canadian sports association for people with cerebral palsy. A few weeks later, he went to Ontario to attend the provincial Games. Two years later, he went to Windsor with a delegation from Quebec that participated in the Windsor Indoor Games. The first Board of Directors of the Canadian Cerebral Palsy Sports Association (CCPSA) was formed and Henri became its first president.

Even without him, an organization such as the CCPSA might one day have been created. But without his combativeness and determination in the face of his detractors, many of us would not be here and would not have heard of sports for people with cerebral palsy. At best, the association would be in its infancy. In the words of Terrie Moore: “As a member of the first Board of Directors, he was a key player in our association. Since he himself had a disability, he understood the importance of having an organization such as the CCPSA and of working tirelessly to build a solid base…I believe he must now be smiling to see the work we have accomplished on behalf of our athletes.”