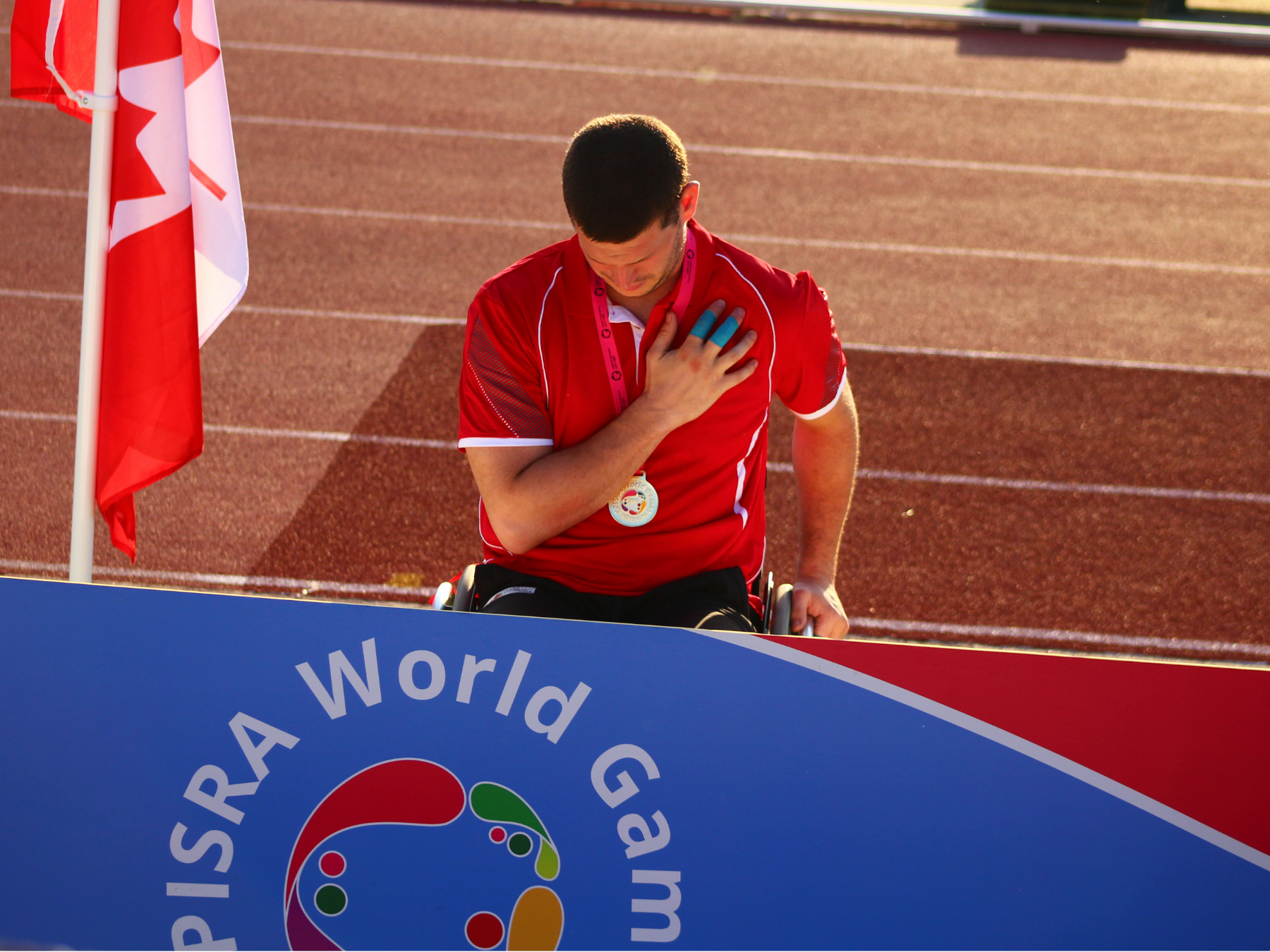 Flag bearer Zachary Gingras (Markham, ON) started things off with a gold medal in the men’s T38 800m.

“It’s an honour to represent my country and everyone that has cerebral palsy,” commented Gingras. Gingras controlled the tempo of the race from the beginning, accelerating in the final stretch to put the result beyond doubt.

The athletics athletes faced an additional barrier with the weather. Barcelona has been experiencing a heat wave since the team’s arrival, which was briefly interrupted today by pouring rain. The rain did little to cool things off. Managing the heat has been a challenge for some athletes, while Gingras chose to use it as a motivation. “The heat is actually beneficial for me because it makes me run faster – so I can get out of the heat quicker”, joked Gingras.

Seventeen-year-old Gingras has only been running for three years, and according to Coach Craig Blackman, is just starting to show his potential. “Over the past eighteen months he has progressed two seconds faster at each meet” said Blackman, “and it’s going to get way better.”

On the field, Julia Hanes (Ottawa, ON) threw a world leading distance of 6.45 in the F33 shot put, but had to settle for silver when Poland’s Lucyna Kornobys countered with a new world record of 6.96m.

Hanes is just returning to competition after surgery, and knows she has her best throws in front of her, although she also has to balance athletics with her career aspirations.

“The Games are a great learning experience for future bigger games,” said Hanes, “but I’m not sure where my sports career is heading. Ideally, I would love to go to a Paralympic Games or a World Championships, but I’ll have to see where things take me. Medical school is currently my biggest priority.” For now she is focused on her upcoming competitions in discus and javelin.

Mike Johnstone (Stratford, ON) overcame lack of sleep, nerves and a rough start to steal a bronze medal in the T36 100m. “It was not something I was expecting to medal in at all,” said a surprised Johnstone. “Then I got across the finish line and realized there’s two guys ahead of me and I clued into the fact that I just won a medal. There was some shouting on my part”.

Coach Craig Blackman watched with growing excitement as Johnstone started to catch up with 60 metres to go. “There was a lot of things that he did better than he has done in the past. The second half of the race he lengthened out his stride and he crushed the guys. He went after it, and now he’s a bronze medallist at the Worlds – unbelievable.”

It was a sweet comeback for Johnstone, who just missed out on bronze in the long jump earlier in the day.

Jessica Tinney (Toronto, ON) and Djami Diallo (Pitt Meadows, BC) added silver medals in the T33 and T34 100m. Kyle Whitehouse (St Catharines, ON) rounded out the day with a gold medal in the T38 100m.

“Kyle was ready to go from the beginning. There was a Spanish guy who looked terrific, and Kyle just handled him,” said Blackman.

Athletics competition continues tomorrow, along with the first day of boccia and swimming events.